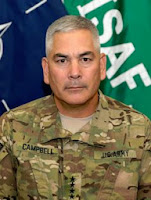 Campbell Completes Command Tour. General John Campbell, the last commander of ISAF and first commander of Resolute Support, is completing his tour of duty in Afghanistan and will soon retire from the U.S. Army. By all accounts he has done a fine job. Read a short biography about General Campbell.

Final Comments. General Campbell was interviewed by Michelle Tan of Army Times on February 22, 2016 where he provided his observations of the Afghan conflict saying that 'A lot of challenges remain'.

Email ThisBlogThis!Share to TwitterShare to FacebookShare to Pinterest
Labels: Campbell