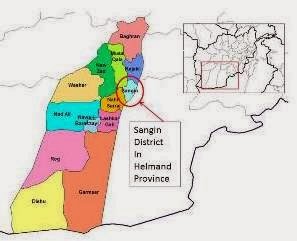 The Taliban have not taken the usual break in fighting during the 2015-2016 winter season. The snow has fallen but the conflict continues in several parts of Afghanistan. One area where the conflict continues is Helmand province in the southwest of Afghanistan. Only two or three of the districts of Hemand province are controlled by the government; the Taliban control the other eleven (?) districts. The Afghan government disputes this assessment; guess it depends on what you mean by district control. Sangin district is noted as the latest to fall -  although the government maintains that it still controls the district and the ANDSF are attempting to (or have) relieve(d) the small district center compound. The Taliban are supported by the Ishaqzai tribe who constitute a sizable part of the population of the province. The U.S. alienated this tribe early in the Afghan conflict pushing them into the Taliban fold. While the Taliban will likely control 95% of Helmand it is doubtful that the Taliban will take the provincial capital Lashkar Gah as the 215th Afghan Army Corps is located there.

ANA and ANP Not Up to the Task. There is still a large amount of corruption, numerous "ghost soldiers and policemen", poor leadership, a lack of coordination among the security forces, and a lack of intelligence. The western nations constant refrain is that the ANDSF are able to stand up to the Taliban - it is obvious that this is not true in some areas of Afghanistan (Helmand for one).

Refugees Flood Provincial Capital. Many Helmand residents fleeing the fighting have gone to Lashkar Gah but safety may be fleeting as the fighting is now at the suburbs of this provincial capital. (The New York Times, Dec 28, 2015).

U.K. SOF units were rushed to the province to shore up the Afghan National Defense Security Forces (ANDSF) - see a UK MoD statement confirming this. See also a news report by BBC News (Dec 22, 2015). According to the UK MoD the UK troops are advisors sent to the former Camp Bastion (now called Camp Shrabak) and they are not engaged in combat (Hmmmm.). There are about 450 U.K. troops throughout Afghanistan in a mentoring and advisory role. Learn more about the UK's involvement in Helmand province in "UK troops in Afghanistan: Timeline of key events", BBC News, December 22, 2015.

Strategic Importance of Helmand? Well, . . .  it depends on who is talking. The U.S. Marines, U.K., Danes, and a few other nations expended a lot of money and the human toll was significant - so they have some strong feelings about the importance of the province. The Brits lost about 100 personnel in the Sangin area along with many more severely wounded. The U.S. Marines also took significant casualties. How would the loss of Helmand province affect Kandahar, Herat and Kabul? Probably not much in the eyes of some analysts. The biggest loss to the government would be the drug trade revenue taken from corrupt army, police and government officials as well as local power brokers. The Taliban would gain a significant source of revenue and a secure area from which to operate - as well as score an important IO victory. They may also consider moving leadership from the safe sanctuary of Pakistan into Helmand province (or at least spread an IO message that this has happened).

R.S. Says Not So Strategic. Perhaps the biggest indicator of the strategic importance of Helmand is by taking a look at where the Resolute Support Train, Advise, and Assist Commands (TAACs) are positioned. There are six field corps of the Afghan Army located at Herat (207 Corps), Mazer-e Sharif (209 Corps), Laghman province (201st), Gardez (203rd), Kandahar (205), and Lashkar Gah (215th). The 215th does not have an advisory team stationed at the Corps HQs. That should tell you something. 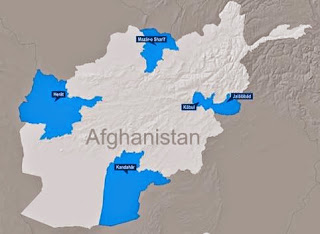