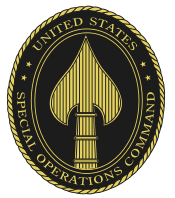 Joe Votel to CENTCOM. News reports indicate that General Votel, the commander of U.S. Special Operations Command (USSOCOM), is being nominated for commander of Central Command (CENTCOM). No word on who will take USSOCOM (another SEAL, another JSOC dude, or just maybe - a Green Beret!).

Tony Thomas to USSOCOM? Some news reports say that the current commander of the Joint Special Operations Command (JSOC), LTG "Tony" Thomas, will take the helm at USSOCOM. Thomas commanded the Special Operations Joint Task Force - Afghanistan (SOJTF-A) a few years ago. If selected "Thomas would be the third former JSOC commander in a row to head up SOCOM; the last time a career Green Beret held the post was more than 15 years ago, before the war on terror began, even though Green Berets account for by far the plurality of SOCOM's special operators and are seeing increased use from Africa to Afghanistan as the military tries to shape the war efforts of allied militaries and irregular forces". Read more in "This shadowy JSOC general is expected to be the next leader of America's special operations forces", The Washington Post, January 7, 2016.

Other Contenders for USSOCOM? LTG John Mulholland, currently assigned to the CIA, is being considered. A long-shot might be LTG Ken Tovo - currently commanding USASOC.

BG Brower Returns to Campbell. General Scott Brower, former commander of the 5th Special Forces as well as a former commander of the Combined Joint Special Operations Task Force - AP (Iraq), has taken up a position with the 101st Airborne Division. He previously was CoS at USASOC and had been deployed to Islamabad, Pakistan. Read more in a news report by The Leaf-Chronicle, January 5, 2016.

Does the UK Need "Tier 2" Units? One commentator says the UK should develop a force similar to the U.S. Army Special Forces Green Berets. The Telegraph, January 4, 2016.

Live to Tell - New Documentary Series. Film 45 is rolling out a 8-part series on elite forces that have been fighting the war on terror since 2001. The program, Live to Tell, airs on the History channel on Sunday nights. First show was on January 10th. www.history.com/shows/live-to-tell

How Not to Do Unconventional Warfare. There are certain steps that need to be taken to successfully form up a resistance group or guerrilla band. These phases of Unconventional Warfare (UW) are learned during Special Forces training for future Green Berets. The recent debacle in forming a resistance fighter group in Syria should certainly be integrated into a 'lessons learned' portion of the the instruction at the Special Warfare school at Fort Bragg. Call it "What Not to Do in UW." Read "What really happened to the U.S. train-and-equip program in Syria?", McClatchy DC, December 21, 2015.