Inside the TAA Mission in Afghanistan 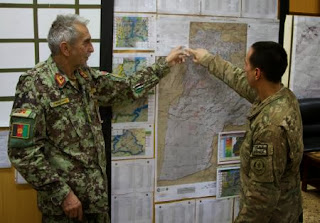 The columnist Franz-Stefan Gady provides us with an inside view of the NATO Train, Advise, and Assist Mission in Afghanistan. He spent some time with the TAAC-South advisory team in Kandahar learning how they conduct their mission. Of note are his observations about the significant use of Guardian Angels to prevent or mitigate insider attacks by Afghan security force members, the reduced footprint of the advisory effort, and the difficulty of how to measure the effectiveness of the Afghan security forces. In addition, the article stresses the importance of the effort in eight areas of focus - called the "8 Essential Functions" by Resolute Support HQs. It is interesting to note that one of the advisors profiled is a 1LT - mostly likely (unless former enlisted) on his first tour of duty in combat - and advising Afghan officers senior to him in rank, age, experience and with many years of combat in Afghanistan. That, of course, says something about the U.S. advisor selection process! Read "How NATO Advises Afghanistan's National Security Forces", The Diplomat, December 22, 2015.