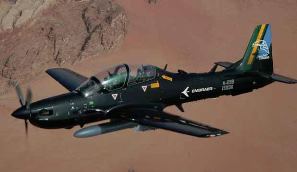 A-29 Tucanos to Arrive. Afghanistan will be getting a COIN airframe - the A-29 Tucano - to assist in the never-ending and escalating threat posed by the insurgents. The Afghan Air Force (AAF) will soon receive 4 light attack aircraft in January 2016. The long-delayed program will be a significant boost to the AAF - which has been lacking in air support capability since the U.S. has withdraw the bulk of its Army and Air Force airframes. It took the USAF a long time to award the contract (Congress interfered as usual in addition to the USAF bureaucracy) and get the program up and running. But then . . . we have only been fighting this war since 2001. Read "Afghan Air Force expecting to receive 4 light attack aircraft in January", Khaama Press, December 22, 2015. See also "After Delays, A-29 Attack Aircraft to arrive in Afghanistan in 2016", Military.com,  December 28, 2015.

Afghan A-29 Pilots Trained - or at Least Some of Them. Eight (or nine, depending on which USAF press release you read) Afghan Air Force pilots just completed (Dec 15) almost a year's worth of training on the A-29 aircraft at Moody Air Force Base in Georgia (U.S.). There would have been two more but in the early part of December, just prior to graduation, two of the prospective pilots left base and disappeared. (Some news reports now say they were maintenance personnel). I presume they have crossed over into Canada or have found employment washing dishes in a D.C. Afghan restaurant. Along with the graduating pilots are twelve maintainers that also completed training. The crews are expected to be ready for combat operations at the beginning of the spring fighting season. More pilot training is expected to take place in the future. Read more in "First Afghan A-29 pilots, maintainers finish training", Air Force Times, December 22, 2015.

Mi 25 Attack Helicopter Arrives. India has decided to help out the Afghan National Defense Security Forces (ANDSF) with some counterinsurgency aircraft as well. It decided - just a few months ago in November 2015 - to provide four of the extremely effective COIN helicopters to the Afghans and one has reached Kabul already. Contrast that with the plodding of the U.S. Air Force in the A-29 program! Three more of the Mi 25's will soon arrive. The Mi-25 come equipped with machine guns, rocket and grenade launchers. Earlier in the year the Indians provided three Cheetal utility helicopters. (The Economic Times, Dec 22, 2015). For one observer, Michael Kugelman, this apparent shift by the Indian government to provide military arms speaks volumes. Read "The most important arms deal you've never heard of", War on the Rocks, December 22, 2015.

Air Power Turning the Tide? Some are heartened by the addition of more aircraft to the AAF inventory. The added capability will provide better close air support to the Afghan National Army and Afghan National Police. I am not so sure. Afghanistan's security problems are more related to poor leadership, corruption, lack of cross-pillar coordination, and a horribly ineffective and divided government. A few additional airframes that probably won't fly much because of maintenance problems won't make that much difference. But it is a new year - let's be optimistic! Read "Air Power Could Turn Tide in Favor of Afghan Forces in 2016", Voice of America, December 31, 2015.