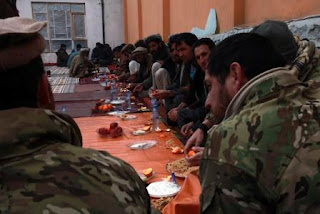 "Security will Improve". If GIRoA says it often and loud enough then it will happen. The Ministry of Defense (MoD) is stating that security will improve in a month. (Well, of course it will as the snow will begin accumulating in the mountain passes and the pace of the fighting season always slows in winter). According to GIRoA eight districts are being controlled by the Taliban. Ummm,  . . . that number is really, really low. (Tolo News, Nov 11, 2015). I guess it depends on what you mean by control of the district.

Sangin District at Risk . . . Again. The never-ending fight for the control of Sangin district in Helmand province continues. 65 ANA soldiers defected to the Taliban with their weapons this past week. The provincial governor (PGov) recently blamed insecurity in the province on negligence by the ANA. (Pajhwok Afghan News, Nov 14, 2015).

Afghanistan Dangerous for Aid Workers. Afghanistan is considered the most dangerous country in the world for aid workers according to the Humanitarian Outcomes research group. (Yahoo! News, Nov 6, 2015).

October Deadliest Month. According to statistics offered by Tolo News October was the deadliest month so far this year based on figures from the MoD and MoI.

NRC Vehicle Damaged. A Norwegian Refugee Council (NRC) vehicle was damaged by a roadside bomb in Jalalabad on Sunday, November 8th. Two local NRC staff members were in the vehicle but were not injured.

Cell Phone Coverage Interrupted in Helmand. For years the Taliban have dictated operating times or total shutdowns of cell phone services in various parts of Afghanistan. In some cases the cell phone companies were 'encouraged' to pay 'taxes' (we call that extortion) in order to continue to operate. Recent reports say that Roshan, MTN, AWCC and Eitisalat have been forced to shut down their mobile services in Helmand province.

Child Soldiers in Afghanistan. A great percentage of the Afghan population is under 18 years. There are reports that some of these children are serving in the Afghan National Police (ANP). Read more in "Child Soldiers: a tool to sustain power in the Afghan war", Khaama Press, November 14, 2015.

"Black on White Attacks". Colors play an important role in warfare. In 'mapology' depicting enemy forces in red and friendly forces in blue helped visualize the 'order of battle'. In Afghanistan green denotes the Afghan National Defense Security Forces (ANDSF) and blue Coalition forces. When we had the spike of insider attacks it was referred to as 'green on blue' events. When ANDSF attacked each other it was referred to as 'green on green'. Now when we see ISIS attacking the Taliban (as in recent clashes in Zabul and Nangarhar) we refer to them as 'black on white'. Guess it has something to do with the flags / banners.

Taliban Factional Fighting in Zabul. Rival Taliban factions have been duking it out in Zabul province. The fighting is currently concentrated in three remote districts of southern Zabul - Arghandab, Khak-e Afghan, and Dai Chopan. The breakaway Taliban faction is led by Mullah Mohammad Rasul and they are opposing the main Taliban faction headed by Akhtar Mohammad Mansur (who succeeded Mullah Omar). The Rasool faction is going by the name of High Council of Afghanistan Islamic Emirate. Some reports indicate that Rasul's faction has been working with local supporters of the Islamic State. Deaths from the fighting are said to number in the high 80s. Read more in "Islamic State Joins Taliban Factional Fighting", Gandhara Blog / Radio Free Europe, November 9, 2015.

Mullah Mansoor Dadullah Killed? Some initial reports on Thursday indicated that the leader of the breakaway Taliban group based in Zabul was dead.

Passengers Beheaded. Seven travelers who were abducted a few weeks back have been beheaded (although perhaps just their throats cut) - including three women and a young girl in Arghandab district, Zabul province. The Hazara hostages were killed by self-styled ISIS militants. A national level protest was held and demonstration outside the Afghan palace walls for the 'Zabul Seven'. Reports indicate that Mullah Mansur-led Taliban executed the eight ISIS militants on Sunday (8 Nov) who beheaded the seven Hazara's. (Afghanistan Analysts Network, Nov 12, 2015).