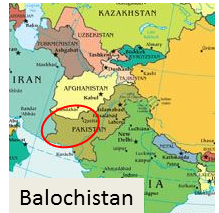 Ann Wilkens, a member of the Afghanistan Analysts Network (AAN) Advisory Board, has wrote an article about the conflict in Balochistan - a region of Pakistan located south of Afghanistan's border. She provides ". . . an overview of this complex issue and concludes that political dialogue is urgently needed, if economic investment is to bring the intended, regional uplift and, most importantly, bring peace to a long-suffering population". There are many Balochs (about 600,000) who live in southern Afghanistan and some of these are refugees from Pakistan. Balochistan is Pakistan's largest province consisting of over 1/3 of the Pakistan land area; however, it represents only 5% of the nations population. While the majority of provinces residents are Balochs there are also significant amounts of Pashtuns and Hazaras. Learn more about this troubled region south of Afghanistan in The Crowded-Out Conflict: Pakistan's Balochistan in its fifth round of insurgency, by Ann Wilkens, Afghanistan Analysts Network (AAN), November 16, 2015.