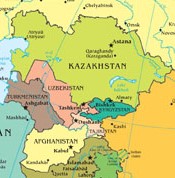 Post-Kerry Visit Analysis. The Secretary of State's five-country tour of Central Asia was big news - just the fact that it happened. Central Asia has been getting a lot of attention from leaders of very important nations to include Japan, India, China and others - but thus far the U.S. has not had a very prominent presence. With the withdrawal from Afghanistan the U.S. focus on Central Asia has diminished. So has the U.S.'s mentioning of the State Department's New Silk Road Strategy (NSRS). So what was accomplished? Probably not much. Read more in "As Kerry Leaves, What's Next for U.S. in Central Asia?", The Bug Pit, Eurasia.net, November 4, 2015.

Central Asia's Human Dimension? Kerry's visit with the dictators of Central Asia begs the question - Why? The nations located north of Afghanistan have a poor reputation when it comes to human rights. The Secretary of State broke new ground when he 'diplomatically' used the words 'human dimension' in place of 'human rights'. Read more in "Lost in Central Asia's 'Human Dimension'", Freedom House, November 4, 2015.

John Kerry and Uzbekistan. The Secretary of State is visiting five Central Asian nations in an effort to bolster the U.S. image in those countries, gain support for U.S. initiatives in the area (New Silk Road), ask for continued support for the Afghan regime, and (in private) raise concerns about human rights. Read more in "John Kerry is Cautious on Human Rights During Uzbekistan Visit", The New York Times, November 1, 2015.

Tajikistan Worried? - Not so Much. Analysts run the range of  'highly concerned' to 'not very' when it comes to evaluating the threat from Afghan insurgent groups crossing the border going north. Read "Tajikistan Brushes off Talk of Islamic State at the Border", Inside the Cocoon - Central Asia Today, November 6, 2015.

Preparing for Chaos. The capture of Kunduz City by the Taliban sent Central Asia into the worry mode. 7,000 Afghan security force members fled to the airport to the south of the city when confronted with 500 Taliban fighters. So Central Asia has good reason to be concerned. Read more in "Central Asia Prepares for Chaos from Afghanistan", Silk Road Reporters, November 6, 2015.

Email ThisBlogThis!Share to TwitterShare to FacebookShare to Pinterest
Labels: central-asia