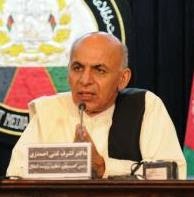 Ghani Visits Kunduz. President Ghani visited Kunduz City this past week. While there he fired the local head of the National Directorate of Security (NDS) and several local government officials. He cited the results of the Kunduz investigation team into the fall of Kundez City - saying that it was an intelligence and coordination failure - not a conspiracy. He also warned that the activities of illegal militias need to be curtailed. While the Afghan government wants to expand the Afghan Local Police (ALP); it has come out trying to discourage some local militias. This has some critics confused as they think that the ALP 'is just another militia'. Many illegal militias or those secretly supported by the National Directorate of Security (think CIA and FBI rolled into one but without the legal restraints imposed by Congress) call themselves ALP in a quest for legitimacy and additional funding. So it is easy to understand the confusion by those not so knowledgeable on the situation of militias. Read more in "Visiting Kunduz, a Taliban target, Afghan Leader Urges Security Overhaul", The New York Times, November 26, 2015.

Child Suicide Bomber. Reports indicated that an 11-year-old boy has been trained as a suicide bomber in Afghanistan. The boy was recently arrested near Kunduz City. He was trained by Taliban militants since he was 5 years old. He was abducted from Khanabad port and kept by the Taliban for six years. (Khaama News, Nov 22, 2015).

Magnetic Bomb in Kabul. A bomb went off in central Kabul on Monday (Nov 23rd) but caused no casualties. It took place near the Habibia High School in the Qalachi area.

Civilians Injured / Killed in Bombing. Civilians were wounded and others killed in a blast in PD5 Kabul near the Austad Rabani University on Tuesday, Nov 24.

IED Kills three Militants. Apparently being an IED emplacer can be hazardous. Three militants were killed when their bomb went off earlier than expected in Kot district of Nangarhar province on Monday, November 23rd. I hate when that happens. (Khaama Press, Nov 22, 2015).

Former DGov Hung in Oruzgan. The Taliban hanged to death a former district governor in southern Oruzgan province. He was kidnapped from his house by gun point and later hung. (Khaama Press, Nov 28, 2015).

Fighting Disrupting Harvest. Food prices are rising sharply as a result of intensified fighting this year across Afghanistan. The war between pro-government forces and the Taliban has greatly affected the agriculture sector in northern Afghanistan. (IRIN, Nov 24, 2015).

Hekmatyar Wants Peace Talks. The head of the Hezb-i-Islami Gulbuddin is proposing that he and his group take part in peace talks with the Afghan government. Some of the conditions attached include the complete withdrawal of foreign troops and new elections in 2016. Read more in "Feared Afghan warlord known for anti-US stance, offer of shelter for bin Laden, seeks comeback", U.S. News & World Report, November 27, 2015.

MoD and MoI Working on Strategic Plan for Summer 2016. As usual, the ANDSF will focus this winter on training and equipping troops to prepare them for the spring - summer - fall fighting season in 2016. And, as usual, they ANDSF will formulate their plans for the upcoming fighting season. (Tolo News, Nov 24, 2015).

NSC Restructuring? The Afghan government is considering an assessment of the structure of the Afghan National Security Council (NSC). This follows the release of the findings of the Kunduz fact-finding team that investigated the fall of Kunduz City to the Taliban. The report point a finger at the NSC - citing poor coordination and management. The report also cited a number of other factors as well. Read more in "Govt To Assess NSC Structure: Hashemi", Tolo News, November 22, 2015.