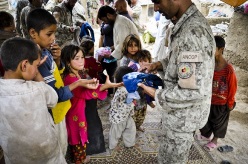 Afghan Refugees. Afghanistan is once again experiencing a huge departure of its citizens. Many are seeking to escape the ongoing (and increasing) violence, some are fearful of a return of the Taliban regime, while others are seeking a greater economic opportunity. Afghan refugees are the second largest group of refugees entering Europe (next to Syrian refugees). The refugee crisis in Europe is at a crisis level and the initial tide of 'reception' is quickly turning to 'rejection' - especially in light of the recent terrorist events in Paris. Some nations are tightening up its refugee policies (Finland, Norway, Germany, etc.). Read more in "Berlin To Fast-Track Deportation of Afghan Economic Refugees", Tolo News, November 16, 2015. See also "Germany launches campaign to deter refugees leaving Afghanistan", Khaama Press, November 15, 2015. See also "German Campaign Asks Afghans to Think Twice Before They Go", Gandhara Blog, November 20, 2015.

Pak Police Not So Friendly to Afghan Refugees. The Human Rights Watch has alleged that police abuses against Afghan refugees in Pakistan have increased significantly during the past year. (Voice of America, Nov 18, 2015). See also "Pakistan: Police Abusing Afghans", Human Rights Watch, November 18, 2015.

Afghan Interpreters. Currently the world is engaged in a debate about what to do with the Syrian refugees. Some want to cut the amount of Syrian refugees entering their countries - citing economic and security reasons. Others want to open the doors to refugees. But there is another group of people that may be more deserving of refuge in Europe and the United States. Read more in "Forget the Syrian refugees. America needs to bring its Afghan and Iraqi interpreters her first", The Washington Post, November 17, 2015.