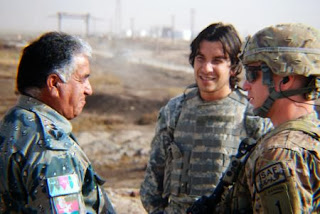 Interpreters Betrayed. When American troops conducted combat operations in Afghanistan their link to the Afghan population was the Afghan interpreter. The past few years - in the time of the 'train, advise, and assist mission' - the American advisors link to the Afghan security forces is the Afghan interpreter. However, with the huge drawdown of U.S. forces in Afghanistan many of the interpreter were soon unemployed and . . . even worse . . . subject to persecution by the Taliban. Many former interpreters hope to find safety in the countries of the Soldier they served with but there are some bureaucratic obstacles that stand in the way. Read more in "The Long, Slow Betrayal of America's Interpreters", War is Boring, November 9, 2015.

Some Help Available. The U.S. has expanded a special immigrant visa program - a provision in the 2016 defense authorization bill would further expand the number of SIVs for Afghan interpreters to 7,000 a year, up from 4,000. One organization, called No One Left Behind, is helping out the interpreters. Read more in "Some struggling Afghan, Iraqi interpreters get help from charity", Military Times, November 14, 2015. Visit www.nooneleft.org

Email ThisBlogThis!Share to TwitterShare to FacebookShare to Pinterest
Labels: interpreters