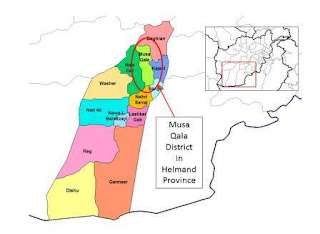 Afghan officials early this week indicated that Afghan National Defense Security Forces (ANDSF) recaptured the district center of Musa Qala. This district is located in the northern part of Helmand province and was the seen of fierce fighting between British forces and the Taliban and later U.S. Marines and the Taliban. Reports indicate that U.S. airpower played as significant role as well as special operations advisors on the ground with the Afghan National Army Commandos and Special Forces kandaks. The counteroffensive was launched by the ANDSF on/about August 28th - two days after the district fell to the Taliban. The town of Musa Qala straddles opium farms and smuggling routes and is adjacent to other districts in Helmand province under the control of the Taliban. Certainly this is a big morale boost for the ANDSF.

CAUTION ALERT: Most insurgencies don't try to "hold" terrain as they can't match up with large conventional forces supported with artillery and airpower - so expectations that the Taliban would retain control of the district center are not realistic. The importance of the battle for Musa Qala is that the government forces were ejected from the district center by the Taliban. In addition, read about the difference between control of the district center and control of the district. Read more in "Afghan Forces Recapture Symbolic Southern District", Gandhara Blog, August 30, 2015. Of course, sometimes information released by the Ministry of Defense is inaccurate. For instance, one news report by the Thomson Reuters Foundation (Sep 3, 2015) says that the Afghan forces have yet to regain control of the symbolic district. Hmmmm. For a detailed report on Musa Qala read "The Second Fall of Musa Qala: How the Taleban are expanding territorial control", Afghanistan Analysts Network (AAN), September 3, 2015.
Posted by Afghan War Blog at 4:00 AM