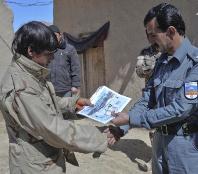 On June 4, 2015 the International Crisis Group released a report entitled "The Future of the Afghan Local Police". The report was critical of the ALP and states that the ALP has had a mixed record in providing for security in many districts in Afghanistan. The report offers several recommendations to include extending the mission of some ALP units, dismantling others, and eventually discontinuing the program altogether. There are 19 total recommendations addressed to a variety of organizations to include the government of Afghanistan, United States DoD, UN Security Council, donor nations, and the United States government.

Afghan Army and Police Pay Boosted. The Afghan president has increased the pay for the ANSF. Poor pay and lack of benefits along with a 59% increase in casualties this year over 2014 has resulted in a significant desertion rate. Read more in Stars and Stripes (June 30, 2015).

New LOTFA Agreement with UNDP. The Ministry of Interior Affairs announced the approval of an 18-month extension of the Law and Order Trust Fund for Afghanistan (LOTFA) with the United Nations Development Programme (UNDP) in Afghanistan. Read more in a UNDP news release (June 30, 2015). A recent news report states that the European Union has made a significant contribution to law and order in Afghanistan (EU Observer, Jul 8, 2015).

EFT for ALP. The Combined Security Transition Command - Afghanistan (CSTC-A) and the MOI have reached an agreement to authorize a mobile money pilot program providing for Electronic Fund Transfer (EFT) of pay for members of the Afghan Local Police (ALP). It is thought that the use of EFT will prevent corruption and 'leakage' of funds. Currently many of the ALP members rely on 'trusted agents' to carry pay to the remote ALP outposts. Read more in an RSM press release (June 29, 2015).

New MoI IG. The new MoI Inspector General says he will reduce corruption in the Ministry of Interior. The Essential Function 2 (TAO) advisors seem quite enamored of him. Hmmmm, we shall see. (RS News, Jul 13, 2015).

Assessment of EUPOL in Afghanistan. This assessment of the European Police Mission in Afghanistan found that it had been partly effective in delivering its mandate. This assessment conducted by the European Court of Auditors makes a number of recommendations applicable not only to EUPOL Afghanistan but to other police missions as well. The EU police mission in Afghanistan: mized results, July 2015, 52 pages, is posted on the Peace Keeping and Stability Operations Institute (PKSOI) website of the U.S. Army.
www.pksoi.org/index.cfm?disp=cdrview.cfm&cdrid=1366

Report - "Not Their War to Fight". Anila Daulatzai of Harvard University has published a paper entitled Not Their War to Fight: The Afghan Police, Families of their Dead, and an American War. The paper claims that Afghan police members work not to secure their country and communities but to seek employment and provide for their families. This 13 page paper provides an alternative (and not entirely incorrect) view of the Afghan National Police.

Email ThisBlogThis!Share to TwitterShare to FacebookShare to Pinterest
Labels: police