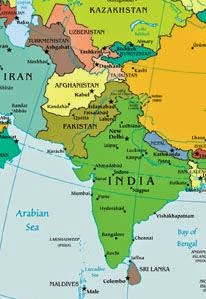 Afghanistan has entered a new era. The United States and its allies are slowly departing and taking a lot of its financial aid with it. The country has a new president who will hopefully bring a more responsive and legitimate government to the forefront, eliminate corruption (a major source of discontent among the population and recruiting issue for the insurgency), reinvigorate the economy, and establish better security by defeating the Taliban.To accomplish this he needs the support and cooperation of competing regional powers - including Pakistan, India, and China.

The evolving relationship among the four countries of China, India, Pakistan, and Afghanistan is interesting to watch. Afghanistan's shift in its relationship with Pakistan has caused a perceived move away from India and requires closer coordination with China (in hopes China can influence Pakistan). Read an article that explores the new relationships in "India should overcome hesitation to play greater role in Afghanistan", by Britta Petersen, Observer Research Foundation, April 27, 2015.


One analyst says that India must 'standby' while Kabul explores its new relationship with Pakistan. It is felt that the situation will play out and India can then re-engage in Afghanistan once again. Read "More modestly, with Kabul", by C. Raja Mohan, Observer Research Foundation, April 27, 2015.

Shakti Sinha writes about policy options for India in regards to Afghanistan in an analysis posted in Eurasia Review, April 27, 2015.

Mustafa Sarwar writes about how Pakistan has failed to deliver in the aftermath of President Ghani's flirting with Pakistan. Read more in "Afghan Leader Knocks on India's Door After Pakistan Disappointment", Gandhara Blog - Radio Free Europe, April 27, 2015.
Posted by Afghan War Blog at 3:00 AM