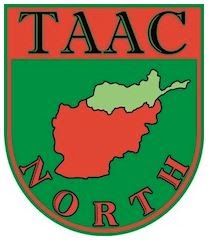 A new commander has taken over as the leader for the Train, Advise, and Assist Command - North (TAAC-North). TAAC-North is responsible for the TAA mission in northern Afghanistan. The lead nation in TAAC North is Germany and historically this country has always provided the commander. TAAC-North is based at Camp Marmal just outside of Mazar-e Sharif. The new commander is Brigadier General Andreas Hannermann. In 2008-2009 he was the German LNO to AFG GS, AFG MoD, and CSTC-C in Kabul. He replaced BG Harald Gante, who spent one year at Camp Marmal - first as chief of staff and then later as commander. Read more about BG Hannemann and TAAC-North.

Email ThisBlogThis!Share to TwitterShare to FacebookShare to Pinterest
Labels: TAAC-North