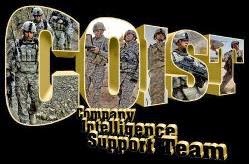 The U.S. Army was not ideally trained at the company level for the conduct of a counterinsurgency in the beginning years of the Afghan conflict. One of the biggest deficiencies was the lack of an intelligence capability within the company headquarters. Later in the conflict the Army adapted and a temporary intelligence element was formed to fix this shortcoming - the Company Intelligence Support Team or CoIST. Some CoISTs worked very well while others were not very effective. Many times the differences in performance could be attributed to the degree of command emphasis and support, selection of CoIST personnel, equipment provided to the CoIST, and the pre-deployment training. The U.S. Army is currently moving on with its doctrine (leaving counterinsurgency in the dust); so the art and science of intelligence operations in support of a counterinsurgency may well be lost. This will be a problem if the U.S. Army becomes engaged in a counterinsurgency effort once again; we will have to re-learn costly lessons. In addition, in the new age of developing partner capacity many of our partner nations are currently engaged in a counterinsurgency effort. For instance, the Afghan National Army (ANA) is going to be involved in COIN for a few more years and U.S. intelligence advisors should be helping the ANA to develop a capability similar to the U.S. Army's CoIST. One writer believes that the CoIST should be institutionalized at company level within the U.S. Army. Victor R. Morris has penned a paper entitled "Why COIST Matters", Small Wars Journal, March 25, 2015. You can read his paper at the first link below. You can learn more about CoISTs at the second link below.

www.afghanwarnews.info/intelligence/COIST.htm
Posted by Afghan War Blog at 4:00 AM