Sunday, March 8th, 2015 was celebrated around the world as International Women's Day (IWD). Afghanistan had its share of speeches and events as well. Various commentators provided us insight on these speeches, events, and the general situation of women in Afghanistan. Below are some of the dispatches that recently hit the Internet world. 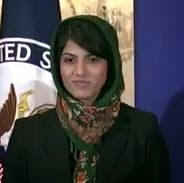 The 2015 International Women of Courage Award Ceremony took place on March 6, 2015.  Every year women from across the globe are recognized by the Department of State. The ceremony was hosted by the Deputy Secretary of State Heather Higginbottom and Ambassador Catherine Russell at the Department of State in Washington, D.C. An Afghan female Air Force pilot, Captain Nilofar Rahmani, was one of eight international women recognized. She is awarded the presentation at the 11:00 minute mark of the video. (posted on YouTube.com by Department of State, videos is 30 minutes long).
www.youtube.com/watch?v=FpqqUhuLaYA

AAN -  Less Speeches and More Action on IWD. "One Day in a Year: Afghan views on International Women's Day", by Naheed Esar Malikzay of Afghanistan Analysts Network (AAN), March 8, 2015. The writer would like to see less speeches and more action. Also provides a history of the origins of International Women's Day and comments on the current situation of women in Afghanistan.

Lela Gilbert writing for Fox News provides us with a short history of IWD and sums up the status of women in the Islamic world. Read "International Women's Day: Celebrating and remembering", Fox News, March 8, 2015.

USAID News Report. Joanne Lewa worked on a six-month temporary assignment in Afghanistan for USAID. She writes women's leadership, women in the economy and politics, and education and health for women in Afghanistan. See "From Kenya to Kabul: Women as Decision-Makers, Entrepeneurs, and Leaders", USAID, March 6, 2015.

NATO Channel posted a short video on YouTube.com celebrating women International Women's Day by highlighting the essential role of women in defence and security from high level decision making to serving in the armed forces. Nice pictures and music compressed into 42 seconds published on March 7, 2015. Some text put on screen. www.youtube.com/watch?v=d-BymkxM-qo

EU Factsheet on Promoting Afghan Women Leaders. The European Union lists accomplishments made thus far for Afghan women but notes that more work needs to be done and Afghan women will need continued support and advocacy. The EU has announced new initiatives to specifically focus on offering training opportunities to Afghan women.

IFEX has published a news article entitled "How Afghanistan's female journalists are covering the stories no one else can" (March 6, 2015).

The Institute for War & Peace Reporting (IWPR) has posted comments by Shahla Farid, a law lecturer at Kabul University about IWD. (March 2015).
Posted by Afghan War Blog at 3:30 AM