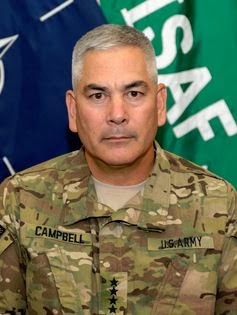 General John Campbell, commander of the Resolute Support Mission, testified before the U.S. House Armed Services Committee on March 4, 2015 about the situation in Afghanistan. The general says that it is " . . . unlikely the Taliban have the ability to best Afghan forces on the battlefield or topple the government . . . ". He believes that the Taliban offensive will increase over the next fighting season and that the government forces will " . . . maintain control over all key territory and populated areas including the country's 34 provincial capitals and its major cities". No mention of whether the Afghan National Security Forces can conduct a counterinsurgency campaign to rid the country of insurgents. He mentioned the early beginnings of an effort by the Islamic State to recruit groups to their cause.

You can watch the testimony on C-SPAN (2 hours 10 mins) at the link below:
www.c-span.org/video/?324603-1/general-john-campbell-testimony-us-policy-toward-afghanistan

The Adobe Acrobat PDF is about 27 pages long. You can read online or download a prepared transcript of his statement at the the link below:
http://www.rs.nato.int/images/media/PDFs/150304campbellstatement.pdf

To support his testimony General Campbell provided a slide brief entitled "Changing the Narrative". It appears that the General is at odds with what the media presents as the situation in Afghanistan so he has provided us with some 'feel good' news at the link below:
www.rs.nato.int/images/media/PDFs/150304campbellsupportdoc.pdf

If you don't have time to read the transcript or watch the video then you can read a press release by the U.S. Department of Defense that summarizes the testimony.
www.defense.gov/news/newsarticle.aspx?id=128293
Posted by Afghan War Blog at 3:00 AM

Email ThisBlogThis!Share to TwitterShare to FacebookShare to Pinterest
Labels: testimony