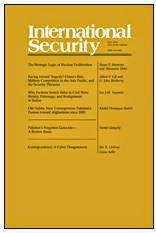 Khalid Homayun Nadira has wrote an academic paper about the Pakistan posture towards Afghanistan. Pakistan has followed competing courses of action in regard to Afghanistan. In some respects it is working with the United States to transport equipment and material along its LOCs, allowing aircraft to overfly its territory, and allowing drone attacks (in some cases). However, its intelligence agency and parts of its military work with the Taliban opposed to the Afghan government; providing sanctuary, information, money, and equipment. Nadira's paper attempts to explain the multifaceted approach of Pakistan. Read "Old Habits, New Consequences: Pakistan's Posture Toward Afghanistan since 2001", International Security, Fall 2014, Vol 39, No. 2, Pages 132-168, posted online November 21, 2014, MIT Press Journal. Read abstract below:


"Since September 11, 2001, Pakistan has pursued seemingly incongruous courses of action in Afghanistan. It has participated in the U.S. and international intervention in Afghanistan at the same time as it has permitted much of the Afghan Taliban's political leadership and many of its military commanders to visit or reside in Pakistani urban centers."

Email ThisBlogThis!Share to TwitterShare to FacebookShare to Pinterest
Labels: Pakistan