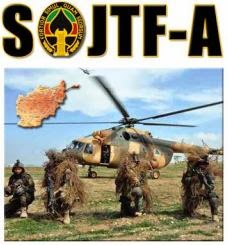 The special operations units in Afghanistan are numerous and varied in their mission and roles. Below you will find a brief description of the various components and their focus areas. The NATO Special Operations Component Command - Afghanistan / Special Operations Joint Task Force - Afghanistan (NSOCC-A/SOJTF-A) conducts Security Force Assistance and targeted Counter-Terrorism in Afghanistan to ensure the enduring relevance, capability, and sustainability of the Afghan Special Security Force, and to deny safe haven to Al Qaeda and its affiliates and adherents. NSOCC-A is the NATO component of the two-star organization (composed of various SOF units from Europe and elsewhere) and SOJTF-A is the United States component of the organization. The commander of NSOCC-A/SOJTF-A is dual-hatted.

There are several components of NSOCC-A/SOJTF-A:

Other special operations task forces conduct offensive operations in Afghanistan to degrade the Taliban, Al Qaeda, and the Haqqani Networks in order to prevent them from establishing operationally significant safe havens which threaten the stability and sovereignty of the Government of the Islamic Republic of Afghanistan and the United States.

Special Mission Wing (SMW) works in close partnership with members of ANASOC, as well as other Afghan National Security Force partners to provide lift and aerial ISR capabilities with Mi-17s and PC-12 aircraft.

Afghan Local Police (ALP) is an Afghan Ministry of Interior sponsored, village-focused security program, which complements counterinsurgency efforts by assisting and supporting rural areas with limited or no ANSF presence in order to enable conditions for improved security, governance, and development.

National Mission Units (NMUs) are Afghan Ministry of the Interior units which conduct special police law enforcement in high threat environments in order to uphold the laws of GIRoA.