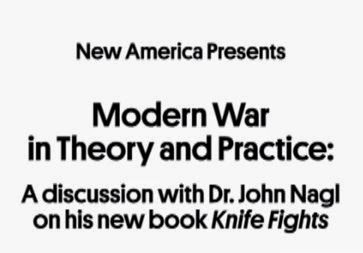 Dr. John Nagl was recently (October 28, 2014) interviewed about his new book "Knife Fights: A Memoir of Modern War in Theory and Practice". Nagl is a retired Lieutenant Colonel in the U.S. Army and a former president of The Center for a New American Century. The book is an education in 21st Century Warfare - both its theory and its practice. Nagl first came into the public eye with his book "Learning to Eat Soup with a Knife" - about counterinsurgency and how the United States had to understand an insurgency and be flexible in its response and able to adjust its strategy to deal with the threat. The interview, narrated by Peter Bergen (no slouch himself on warfare, insurgency and terrorism) was recorded by The Center for a New American Century, it is 1 hour and 23 minutes long and can be seen at the link below on YouTube.
www.youtube.com/watch?v=x6WLiErc2mw
Posted by Afghan War Blog at 4:00 AM