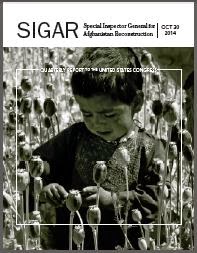 The Special Inspector General for Afghanistan Reconstruction (SIGAR) has released its Quarterly Report to Congress dated October 30, 2014. The ". . . report provides a summary of SIGAR's oversight work and an update on developments in the three major sectors of Afghanistan's reconstruction effort from July 1 to September 30, 2014. It also includes a discussion of U.S. counternarcotics efforts in Afghanistan. During this reporting period, SIGAR published 31 audits, inspections, alert letters, and other products assessing the U.S. efforts to build the Afghan security forces, improve governance, and facilitate economic and social development."