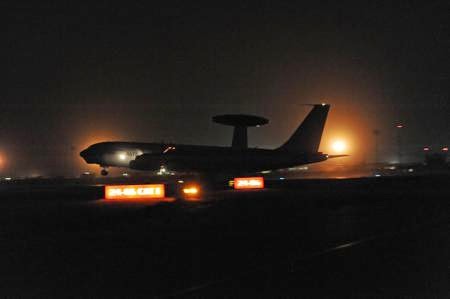 The last AWACS E-3A stationed at Mazar-e-Sharif departed on September 23, 2014 for its home station. NATO has stationed E-3As in northern Afghanistan (at Camp Marmal) for the past several years. The air field at MeS does not have the high-end radar systems to monitor and control multiple aircraft (helicopters, fighters, transports, contract aircraft, civilian aircraft, etc.) so the AWACS provided that ability. Now that ISAF is withdrawing and there are only a few NATO aircraft left in the north the E-3A is no longer needed. The E-3As were flown and staffed by NATO aircrews from across Europe. The primary function of the E-3A is airborne surveillance, command, control, and communications. The aircraft has an endurance of more than 8 hours and can be refueled in the air.

The following links provide information on the AWACS. You can visit the NATO AWAC E-3A Component website, get a virtual (online tour) about the E-3A here, see the NATO E-3A Component Facebook, view a video clip about the features of the plane, and view a video of an USAF E-3 Sentry mission over Afghanistan. (Photo by Wiel Borghans shows the last E-3A departing Mazar-e-Sharif airfield).
Posted by Afghan War Blog at 4:00 AM

Email ThisBlogThis!Share to TwitterShare to FacebookShare to Pinterest
Labels: Air-Force