According to a recent report by the United Nations civilian casualties have rose abut 24% by mid-year 2014 over the first six months of 2013. 74% of these casualties are attributed to the "Anti-Government Elements", 8 % to Afghan National Security Forces (ANSF), and 1 % to international forces, 12 % to ground engagements between the ANSF and Anti-Government Elements (casualty not attributed to either side), 4 % to the explosive remnants of war, and 1 % to cross-border shelling from Pakistan into Afghanistan. The graph below, taken from the report shows the numbers of civilian deaths from 2009 to 2014  (January to June) caused by the Taliban (red), Afghan National Security Forces and ISAF (green), and other (yellow). 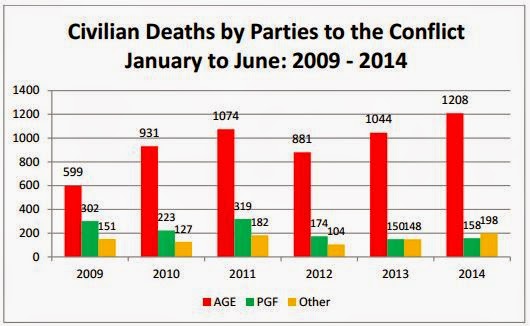 The report entitled Afghanistan Midyear Report 2014 Protection of Civilians in Armed Conflict, was published in July 2014. The two organizations responsible for the report are the United Nations Assistance Mission in Afghanistan (UNAMA) and the United Nations Office of the High Commissioner for Human Rights. This comprehensive report contains a number of graphics that depicts the different numbers and categories of civilian casualties. You can read or download the report online at the link below:

Email ThisBlogThis!Share to TwitterShare to FacebookShare to Pinterest
Labels: civcas