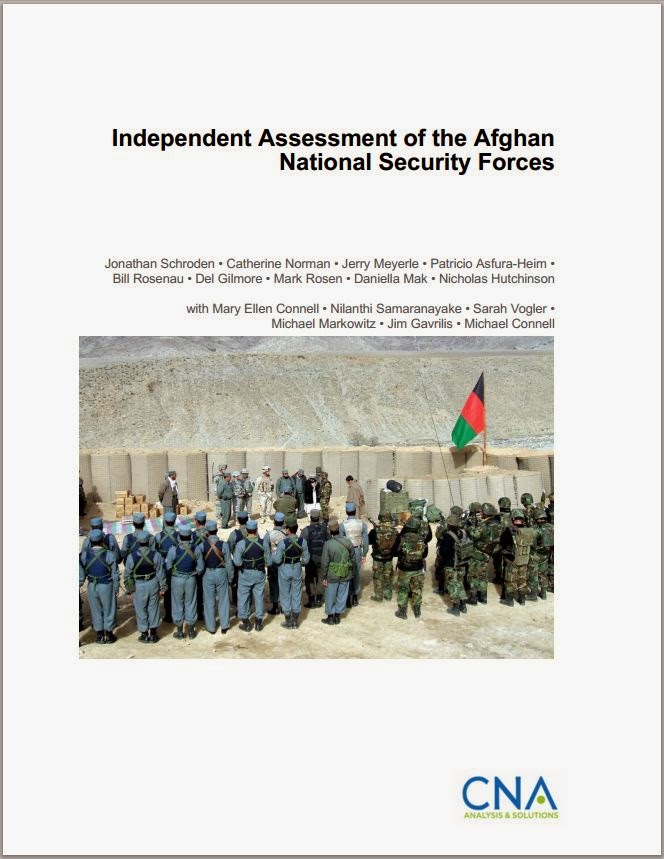 The Center for Strategic Studies of the Center for Naval Analysis (CNA) was tasked by the United States Congress and directed by the Under Secretary of Defense (Policy) to conduct an independent assessment of the Afghan National Security Forces. This report, dated January 2014, was conducted by a group of CNA analysts who have considerable experience with Afghanistan's security situation.


"The CNA report concludes that the security environment in Afghanistan will be more challenging after the draw-down of international forces in 2014; that the Taliban insurgency will become a greater threat to stability than now; and that a small group of al Qaeda members will remain active in remote valleys of northeastern Afghanistan. We also conclude that the ANSF will require a security force (Afghan National Army and Police) of 373,400 people - smaller than their present size but significantly larger than was envisaged at the 2012 NATO summit in Chicago. A force of lesser size than 373,000 would, in our assessment, increase the risk of instability of Afghanistan and make success less likely for the U.S. policy goal for Afghanistan".

The report, Independent Assessment of the Afghan National Security Forces, is an Adobe Acrobat PDF, 4 MBs big, and 378 pages long. It can be accessed on the CNA website at this link.
Posted by Afghan War Blog at 3:30 AM