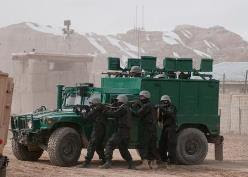 Afghan Society Contributes to Insecurity. Nafay Choudhury, a research fellow at the Afghan Institute for Strategic Studies in Kabul, says that structural conditions in Afghan society contribute to insecurity. Read more in "The Kabul Hotel Attack: Moving Beyond the Blame Game", The Diplomat, February 23, 2018.

Lithuanian SOF Deploying to Afghanistan. Lithuania is increasing its contribution to NATO's Resolute Support Mission with the deployment of elements of its special operations forces.

20 ANA Killed Feb 23rd. The Taliban conducted a nighttime raid on an Afghan military base in Bala Baluk district in the western province of Farah killing more than 20 soldiers. The insurgents overran the base capturing weapons, vehicles, and equipment. Security in Farah province has deteriorated in the past two years. (FDD's Long War Journal, Feb 24, 2018).