Green Beret Describes 7-Hour Battle in Afghanistan. A U.S. Army Special Forces Soldier was critically wounded during a long firefight in Shok Valley, Afghanistan in 2008. He describes being shot during an operation with about 100 Afghan Commandos. A bullet went through the side of his pelvis severely damaging the ball and socket of his hip. A second bullet hit him in the bicep and thigh. Read about the firefight and his MEDEVAC in this story (Scout, October 28, 2016).

Civilian Outreach? Conducting a counterinsurgency campaign is more than just military action against insurgents. COIN is a comprehensive approach that requires engagement with the civilian sector (economic, development, political, governance, etc.). This in turn requires the deployment of civilians with specific areas of expertise. One such discipline is that of civil engineering. Read the story on a civilian getting ready to deploy to Afghanistan in "Corps of Engineers Project Management Chief deploying to Afghanistan", DVIDS, October 28, 2016. 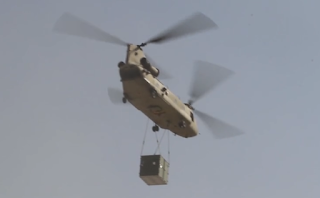 Video - Sling Load Opn in Afghanistan. How do you move big equipment containers to remote areas that have dangerous roads and rough terrain? Use a big U.S. Army Chinook helicopter and sling load the equipment container from below. Watch a 7-min video on a chopper sling load operation. (U.S. Forces Afghanistan, October 27, 2016)
www.dvidshub.net/video/489674/1cd-rssb-sling-load

ICRC Update on Afghanistan. The International Committee of the Red Cross helps displaced persons and impoverished communities in Afghanistan. Read an update of their activities over the past several months in "Afghanistan: Facts and figures, July-September 2016", ICRC, October 27, 2016.

Brick Kilns Along Bagram / Kabul Road. I used to drive the road connecting Kabul to the huge U.S. base north of Kabul quite often. I always wondered about the many brick kilns along the road. Now I now more after reading this article "At Afghanistan's Brick Kilns, Debt Can Last Generations", ABC News, October 28, 2016.

Podcast - Afghan Ambassador to U.S. The Afghanistan ambassador to the United States was recently interviewed by the Hudson Institute. Listen to the conversation here. (Iowa Public Radio, Oct 27, 2016)

Peace Talks and Women? Supposedly Afghanistan has a plan to include women in the peace talks with the Taliban and other insurgent groups. It was supposed to have been wrote and disseminated in 2015 but nobody has seen it. Read more in "Afghanistan's Mysterious Vanishing Plan on Women and Peace Talks", Human Rights Watch, October 27, 2016.

The Birth of a Nation. Three hundred years ago an Afghan tribal leader took on two of the most powerful empires in the world and won the independence for Afghanistan. Mir Wais Hotak, a chief of the Pashtun Ghilji tribe based in Kandahar, helped resist Persian pressure to convert the Sunni population to Shia Islam. In the process of this revolt he helped to found a nation called Afghanistan. Read more in an article by Akhilesh Pillalamarri in "300 Years Ago, Afghanistan's 'George Washington' Died", The Diplomat, October 28, 2015.