ISAF HQs (now Resolute Support) had unexpectedly classified data about the Afghan National Security  Forces (ANSF) that for over a decade had been unclassified. After criticism from Congress and the media the Resolute Support HQs declassified the data so it is now once again available to Congress and the public. Read the newly declassified material in a report by the Special Inspector General for Afghanistan Reconstruction (SIGAR), published in late February 2014. One key graphic in the now unclassified report depicts a decline in end strength for the ANA force levels. In February 2014 the total for ANA personnel was almost 185,000. The figures for November 2014 show a figure of 169,000 - a significant drop in personnel. 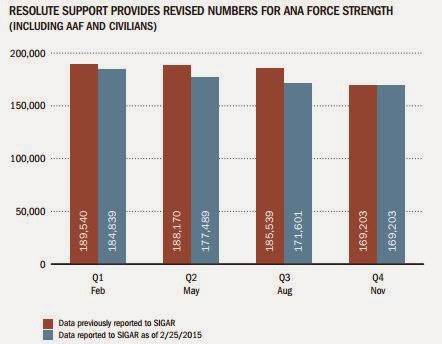 www.sigar.mil/pdf/quarterlyreports/Supplement_2015-01-30qr.pdf
Posted by Afghan War Blog at 3:00 AM