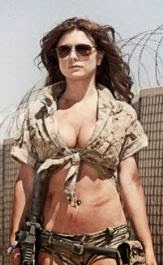 The U.S. Army Special Forces has a unique set of missions that set it off from the rest of the Army in general. This mission set is very arduous and complicated requiring intense Special Forces training to ensure that the SF Soldiers meet the highest standards and are ready to tackle almost any mission it is confronted with. Special Forces tend to be very unconventional; of course, Unconventional Warfare (UW) is one of their primary missions. As a result of their extensive training and the ability to think and operate "outside the box" they tend to break some of the rules just a little bit from time to time. This is true while deployed in a war zone, operating overseas on training exercise, or while at home station cooling their heels between war zone deployments (of which there are many). SF Soldiers also like to take care of their own and others - especially the wounded from the long-running wars in Afghanistan, Iraq and elsewhere.

The 19th Special Forces Group, a unit that probably has deployed each of their members to Afghanistan or Iraq at least four or five times in the past 13 years, has probably gotten itself into "hot water" in assisting a very worthy cause - called "Help for Heroes" - which is an organization dedicated to helping wounded veterans from the United Kingdom. Some young women from the United Kingdom were looking for a location to shoot some photos that will appear in a calendar that will raise money for needy wounded war veterans. The 19th Special Forces Group heroically stepped up to the plate to assist. However, it appears that some "naysayers" are casting doubts on the wisdom of providing this assistance to fellow wounded veterans from across the pond (the same ones that have their SAS chaps in Afghanistan and Iraq (in the fight against ISIS) working alongside us at the moment). Seems there are some pouty pusses out there that have their panties in a wad who not happy with 19th SFGA and they are pushing for an investigation. You can watch a video on YouTube that provides some behind-the-scenes "scenery" on the photo shoot for the Hot Shots 2015 calendar, If your interested in the calendar you can learn more here at www.hotshotscalendar.com. Myself? I give a tip of the hat to 19th Special Forces Group!
Posted by Afghan War Blog at 4:00 AM