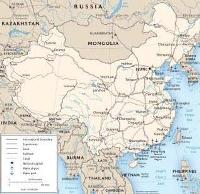 China is the worlds' second largest economic power. It has ambitions of establishing itself economically in Asia so that it can sustain its economy for many years to come. Part of this ambition is the extension of trade, access to raw materials and energy sources, economic power, military power, and the securing of water rights and sea lanes in the Pacific (especially in the East China Sea and South China Sea). However, often overlooked is China's expansion to the west. It has engaged in closer economic ties with Pakistan, is actively working in the further development of the "New Silk Road" in the Central Asian States, and working to improve ties with Afghanistan.

The New Silk Road has a lot of players cooperating and competing with each other. China's interest is obvious - the ability to market goods, establishment of transportation corridors (railways and roadways), access to the gas and oil fields of Central Asia, and access to the minerals found in large amounts in Afghanistan. Russia wishes to remain the dominant force (economically, politically, and militarily) in the Central Asian States (former entities of the Soviet Union) - so it competes to an extent with China. And of course, there is the aspect of the United States trying to maintain some influence in the area - although it is at a distinct disadvantage geographically.

China and Afghanistan. There will soon be a void in Afghanistan - both politically, economically, and militarily. This will be especially true if the Bilateral Security Agreement is not signed and the NATO countries decide not to take part in the Resolute Security mission. China has an interest in a stable, secure, and economically prosperous Afghanistan. It has sat out the conflict and may soon be one of the few nations to benefit from the long-term NATO engagement in Afghanistan. Under the radar China has been carefully increasing its ties with Afghanistan.